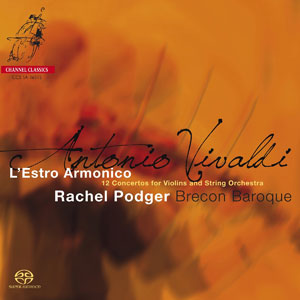 Rachel Podger and Brecon Baroque’s Vivaldi L’Estro Armonico recording for Channel Classics has been nominated in the concerto category for the BBC Music Magazine Awards 2016. Record of the Month last March in both BBC Music Magazine and Gramophone Magazine the disc was also awarded a Diapason d’Or.

“there is probably no more inspirational musician working today than Podger.”
Gramophone Magazine

The double disc went straight into the Specialist Classical Charts at No.4 and has also received praise from reviewers including The Sunday Times, The Times and The Observer.

“intimacy in the rapt slow movements and sizzling dash in the allegros.” The Sunday Times

“this scintillating album” The Times

“these one-to-a-part performances by Rachel Podger and Brecon Baroque have the heat to make your blood run faster… What really shoots this recording straight to the top of the pile, however, is the sheer joy of it, the spontaneity and the tireless, surging musical energy of its many sudden feints and sallies… there is probably no more inspirational musician working today than Podger, in whose company surely no violinist’s bow could sleep in the hand. She certainly had me reaching for my air-violin.” Gramophone Magazine, Record of the Month

The awards are decided by public vote. Voting is now open and you have until 19 February to log your category choices. Winners will be announced in a ceremony at Kings Place on 5 April 2016 and in the May edition of BBC Music Magazine.