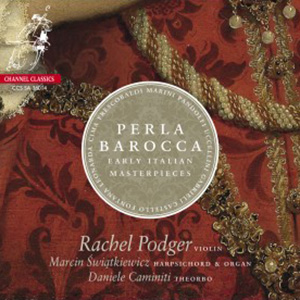 After winning the Instrumental category in the BBC Music Magazine Awards 2014 for Guardian Angel, Rachel and her record label Channel Classics are back with a new CD, Perla Barocca.

Released today, in advance of Rachel’s own Brecon Baroque Festival 24-27 October which commemorates the 300th anniversary of CPE Bach, this disc instead looks to Germany’s neighbour, Italy, for inspiration.

Including works by Frescobaldi, Gabrieli, Pandolfi & Fontana amongst others, this beautiful collection of masterpieces showcases sublime examples of the early Italian Baroque. Some composers dominate the repertory; others have left behind only a handful of works. Here, they come together to convey the diverse musical landscape of such an excitingly rich and creative era, Perla Barocca.

By the mid-seventeenth century, musical composition had reached a point where invention had converged with technical mastery. Composers embraced a bass line lively with linearity, often entering into dialogue with the upper voices. Exploratory harmonic schemes were encompassed within larger unified tonalities. Through rhetorical structures, such as motive, imitation and sequence, composers instilled logic into their musical arguments. These characteristics, though rooted in vocal practice, were being cultivated for the first time in musical history for instrumentalists. In other words, the Baroque was born.

Perla Barocca is released today on Channel Classics and can be purchased directly from its website.

Praise for Rachel and Guardian Angel: “Characteristically unforced and natural, the playing manages to sound endlessly considered yet spontaneous. There’s a sureness to the placing of every note, whether poised or bristling with bite and bravado. And Podger speaks the Italian of Tartini with a native fluency... All in all, utterly 'stupendious'.” BBC Music Magazine