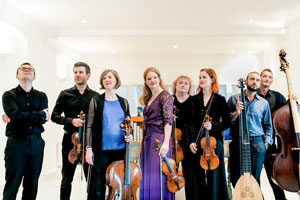 The dynamic ensemble Brecon Baroque consists of an international line-up of world-class virtuosi in the period-instrument world. Together they specialise in one-to-a-part repertoire including Vivaldi, Biber, and Bach that brings them into the spotlight alongside their director Rachel Podger.

Highlights have included Wigmore Hall as part of Rachel Podger’s Artists in Residence in 19/20, Edinburgh International Festival, tours of continental Europe and Japan, and performances at their very own Brecon Baroque Festival which went virtual in 2020. Future engagements include performances and a recording of Chad Kelly’s new arrangement, The Goldberg Variations Reimagined, written especially for Rachel and Brecon Baroque.