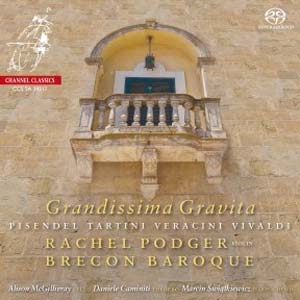 News · The Artful Podger: a new 'Seasons' pocketful of gold

As Rachel prepares for her return to the studio with Brecon Baroque to record an eagerly anticipated Vivaldi Four Seasons for release in her 50th birthday year, Channel Classics launches new album Grandissima Gravita. The album is a virtuosic medley celebrating violinist composer greats Vivaldi, Tartini, Veracini and Pisendel. Corelli’s Opus 5 was a source of inspiration for each of the Italian composers. Grandissima Gravita can be purchased from 22 September. Further recording treats for 2018 include Bach’s solo cello suites. 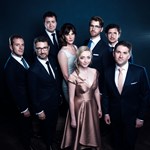 Rachel’s concert calendar is triple crowned by an extensive tour to Australia (Musica Viva) & Europe with the Orchestra of the Age of Enlightenment performing Mozart, a tour of Vivaldi Four Seasons with her own Brecon Baroque to celebrate the CD, and an exciting new collaboration, Guardian Angel, with star vocal ensemble VOCES8. Inspired by her BBC Music Magazine Award winning disc and including Biber’s Passacaglia of the same name, Podger’s serene and beguiling virtuosity is the guiding voice in Guardian Angel amidst choral masterpieces sung by the ‘impeccable’ (Gramophone) VOCES8. Including a new commission by Owain Park, and works by VOCES8 composer in residence Jonathan Dove and Sir James MacMillan, this meditative programme will tour throughout 2018/2019 and is sure to inspire. Guardian Angel will be premiered in March 2018 and tickets are newly on sale today for the London premiere at Kings Place on 28 March.

Further treats include a tour with BBC National Orchestra of Wales, solo concerts and tours to Spain, Holland, Japan and the Canary Islands, and appearances at the Wigmore Hall and Lincoln Center. Rachel’s own Brecon Baroque Festival is 26-30 October and includes performances by I Fagiolini, Brecon Baroque and Ensemble Diderot. Rachel’s extensive education work continues at the Royal Academy of Music and Juilliard.