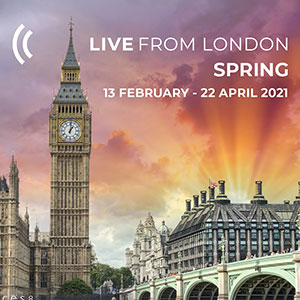 “Spring is the time of plans and projects.” (Leo Tolstoy) – As we embark on a new season of change and regrowth, we are reminded of the year that has changed the world as we knew it. Out of the darkness, new projects were created to bring light and music back into our lives. Two projects that stemmed from the absence of performances and are continuing to help cover losses from COVID19, are the VOCES8 Foundation’s online festival LIVE From London, and the Continuo Foundation which Rachel Podger is proud to be a Patron. In addition, Rachel Podger and Christopher Glynn will release the world premiere recording of Mozart Sonata Fragments by Timothy Jones in March.

Rachel Podger opened the VOCES8 Foundation’s LIVE From London Christmas festival with a special advent version of A Guardian Angel with VOCES8. “We should pray to the angels, for they are given to us as guardians” (Saint Ambrose). The beautiful, candlelit mediation included solo Biber and Bach for which Rachel is acclaimed, alongside advent carols and prayers by Praetorius, Claas, Mendelssohn and Britten. The programme featured the premiere of Alec Roth’s Men and Angels with a new violin part written especially Rachel, alongside Jonathan Dove’s The Three Kings and Owain Park’s Antiphon for the Angels which was written especially for the original project. “[VOCES8 and Rachel Podger’s] evocative Guardian Angel concert was musical balm after the strangest of years, providing hope that all might yet come good... this was an early Christmas present of a concert, and one well worth unwrapping.” inews

Following the successful Christmas performance, Rachel Podger will guest lead The Academy of Ancient Music conducted by Barnaby Smith in Bach B Minor Mass on Easter Sunday as part of the LIVE From London Spring festival from the Church of St Bartholomew the Great, London. Bach’s exuberant and life-affirming B Minor Mass will feature a star-studded line-up of vocal soloists including Carolyn Sampson, Helen Charlston, Iestyn Davies, Jeremy Budd, Matthew Brook, and VOCES8. To purchase your season ticket for all 10 performances from Valentine’s Day through Passiontide, click here.

Rachel is delighted to be a Patron of a new organisation, The Continuo Foundation, which was founded by Tina Vadaneaux. The foundation was set up to support a flourishing historical performance sector, sustaining the careers of its virtuosic freelance musicians, creating opportunities for the next generation of artists entering the field, and widening access to performances for communities across the UK. The foundation has reached a milestone with £100,000 raised to support historical performance musicians and ensembles. “The extraordinary loss of work and engagement with audiences has been both financially and creatively disabling. Continuo Foundation’s vision of unity and support is inspiring. I am proud to be a Patron.” Rachel Podger

To learn more and find out how you can support the foundation, please click here.

Having first recorded the complete Mozart Sonatas for violin and piano Vol 1 in 2004, Rachel and Christopher Glynn will release the world premiere recording of six Sonata-Allegro fragments and a Fantasia for violin and piano completed by Timothy Jones. The album will be released on 26 March on Channel Classics and is supported by the Royal Academy of Music. The disc is made up of multiple new completions of fragments based on Mozart’s evolving style during the 1780s, exploring the open-endedness of the fragments and the different directions the music might have taken. Jones writes: “My completions inevitably disfigure Mozart’s music; but I have never had a problem hearing performers’ own improvised or composed cadenzas in Mozart’s concertos, and my task here was just one step further. I hope these sonata movements might be found diverting as a piece of criticism, if nothing else.”