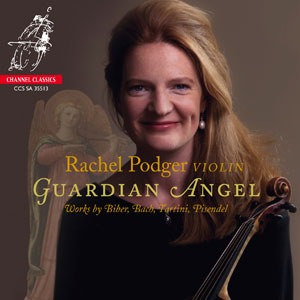 Rachel’s acclaimed solo recital album Guardian Angel (Channel Classics) has been nominated in the instrumental category of the prestigious BBC Music Magazine Awards 2014. Award winners will be selected by the public and votes can be cast on the BBC Music Magazine’s website from today; voting closes on 28 February 2014.

Reviewed in the December issue of BBC Music Magazine, and given 5 out of 5 stars for both performance and sound, Rachel’s playing is described as “Characteristically unforced and natural, the playing manages to sound endlessly considered yet spontaneous. There's a sureness to the placing of every note, whether poised or bristling with bite and bravado. And Podger speaks the Italian of Tartini with a native fluency...All in all, utterly 'stupendious'.”

Guardian Angel demonstrates how composers in Germany, Italy, Austria and England responded to the challenges of writing for violin senza basso. Offering a sumptuous haul of musical gems including pieces by Tartini and Matteis, a transposition of Bach’s beautiful Partita for flute in A minor and the hauntingly mesmeric final sonata Guardian Angel from Biber’s 'Mystery' Sonatas, this disc is a must have for your CD collection. If you’d like to listen to a track before voting for, or purchasing, the disc, BBC Music Magazine’s website includes the gorgeous first movement, Cantabile, from Tartini’s Sonata in B minor.

Please summon your voting power (and that of your families and friends) and log on to vote for Rachel (Guardian Angel, Channel Classics). Vote now!

The awards jury says…
"If you suspect that almost 80 minutes of solo Baroque violin is a tough sell, just surrender yourself to the musical ingenuity of JS Bach, Pisendel, Matteis, Tartini and Biber, in the hands of someone who speaks their language as effortlessly and fluently as they could possibly wish. It’s simply gorgeous."