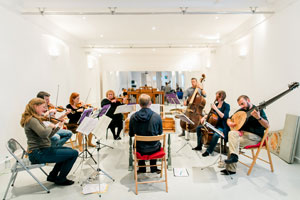 Following on from the extraordinary success of Vivaldi’s La Stravaganza and La Cetra on Channel Classics which respectively won a Gramophone Award and a Diapason d’Or de l’année, Rachel and Brecon Baroque will be touring and recording Vivaldi L’Estro Armonico concertos for 1, 2, 3 and 4 violins in 2014, the disc will be released in 2015.

Written by Vivaldi in 1711, scholar Michael Talbot describes the works as “perhaps the most influential collection of instrumental music to appear during the whole of the eighteenth century.”

Teamed with either Bach Art of Fugue or La Cetra, the programme shows Vivaldi at his most sparkling and will appeal to both specialist early music fans and ‘classical’ audiences alike.

If you are interested in supporting the recording of these works please contact us for more information.